How to increase value along your supply chain via automation

Automation is nothing new. At the end of the 19th century, with the possibility of generating electricity and the electric drive, came a push for the second Industrial Revolution. Companies were now able to produce their products in record time, and thus masses of motorized assembly lines came to be. The biggest beneficiaries were automobile manufacturers, including Henry Ford, who today is considered the inventor of assembly line production. Thanks to automated production, he was able to increase productivity and quantities enormously: The production time of his T-model was reduced from an impressive 12.5 hours to just 90 minutes. Since then, the production line has become an integral part of production. We think that was just the beginning. The importance of automation will continue to increase with Industry 4.0, the fourth Industrial Revolution. Artificial intelligence and progressive digitization enable innovative automation options, even along the supply chain.


From individual automation to intelligent automation

Take a look into the development history of automation. According to the classical concept of automation, machines are artificial systems that independently follow a program and thereby make decisions for the control and regulation of processes. Depending on the scope of these control and regulation tasks, a distinction is made between partial or full automation. The idea is to increase productivity by providing mechanical support for rigid, repetitive manufacturing operations.

At the beginning, automated single solutions with defined functions were realized in production engineering. With further development, these individual solutions were combined to form complex automation solutions along the production process - the foundation for full automation. In addition to industrial processes, human life became the focus of automation technology. Automatic household appliances and assistance systems in vehicles or service robots (e.g. for lawn mowing) remove the work for humans and should make actions safer and more efficient. The problem: The functionality of these automation solutions must be clearly defined in advance in algorithms. The more flexibility is desired in the later program sequence, the more complex it becomes. The solution lies in intelligent automation. In so-called "adaptive" automation systems, the basic algorithm is modified depending on the situation by a superordinate level. They adapt themselves to new circumstances and solve problems independently. Their goal always remains the same, only the way there changes. This benefits industry. Intelligent robots can take on a variety of services, such as carrying out complex sorting activities or transporting goods within the factory in logistics with, for example, no floor markings or a defined transport route.

The relationship between automation and communication

What the reality of tomorrow looks like: Your customer orders something and 3D printers pick up the details and produce the product. Robots pick the products, package them, load them, and ship them with an electric, autonomous truck. Arriving in the vicinity of the target customer, drones take over the last stretch of the shipment to the receiver while the truck continues to follow its route.

The example is ahead of its time. However, it shows the potential for automation if companies succeed in communicatively linking the individual process steps and if companies are prepared to adopt a holistic view beyond the normal production process. Overarching efficiency improvements, personnel savings, and shorter lead times are possible.

To connect automation technologies with communication technologies, you need a comprehensive infrastructure (e.g. wireless technology), and high-performance devices, such as smartphones or tablet PCs. This way, voice and image information can be exchanged without restrictions and the various automation systems distributed in the factory or transport system can be controlled electronically. Their interaction creates a holistically automated value-added process. What does that mean for supply chain management?


The influence of automation on the supply chain

Many future scenarios are conceivable: automated purchasing processes, robot-assisted in-house logistics, autonomous distribution, etc. However, in today's operational process reality, the value-adding degree of automation is still low. A lack of planning and structure will lead to inefficient transport and dissatisfied drivers.

A crucial weak point is the lack of transparency: The transfer of digital information is just as important as the automation of goods flows. Many logistics specialists shy away from the effort required to integrate sensible IT and community systems that go beyond classic warehouse management.

You might assume that automation is not a key factor for your core business. Keep in mind that in both the handling of goods and the handling of data, manual labor increases error rates. Every manual step poses a risk to the security and quality of the data. Conclusion: For the strategic automation of the supply chain, goods and information flows must grow closer together. This is also reflected in the industry trends on sensors, autonomous vehicles, logistics robots, data science, and machine-to-machine communication.

Robots: They've been around for over 30 years. Although the USA is considered a pioneer, Japan has snatched the role as the key player in the global market with about 402,000 robots produced annually. This technology has arrived in Germany as well. The use of robotic technology in operative logistics opens up new potential: Time-consuming picking and storage processes are faster and more accurate. Germany as a business location is becoming more attractive as lower labor costs, one of the main factors for relocating abroad, is losing significance thanks to intelligent robotics. However, as the use of robots is accompanied by a high level of investment, how robots should be introduced must be analyzed specifically for each individual site. But the technology continues to evolve and the question is not whether but when the use of robots will pay off. Essential prerequisites for robotics in logistics are:

Autonomous Vehicles: Hardly any other logistics topic has greater expectations for it as autonomous driving. The ideal image of an electric truck that transports goods from A to B without the intervention of the driver would make transport processes more efficient, safer, and lead to a revolution in the logistics market. Automation could save scarce personnel in the transport sector, reduce emissions through electric power, and increase sustainability in the transport sector. Driving bans, as they are currently discussed and implemented in certain major German cities, would be a thing of the past. Even though the technology is now well advanced, infrastructural, legal, insurance and labor law factors must be clarified before regular operation of these vehicles can begin. You will also find information in the chapter, "Digitalization along the supply chain".

Data Science: The convergence of digitalization and automation opens up new possibilities. Data science, a term generally used for the methodical extraction of knowledge from data, is a good example of this. In the world of supply chain management, there is countless information waiting to be purposefully structured, analyzed, and applied. Automated algorithms support this, resulting in more data transparency, more effective performance monitoring, and faster decision-making. Analysis tools and systems along the value chain help to interpret the diverse information correctly and to identify optimization approaches in processes. An example from distribution is the automated assignment of transport orders to drivers and means of transport. More about this topic can be found in the chapter, "Digitalization along the Supply Chain".

Machine-to-Machine Communication (M2M): The Internet, mobile communication and their counterparts allow machines to share data directly with one another. This combination of automation and intelligent communication plays an important role in the production area while having a positive effect on the entire order fulfillment process. Some examples include:


Your first steps toward innovative automation

Be critical - because we are too! Automation technology is not always the best solution. Although we have talked a lot about the benefits and opportunities of the new automation, implementing the technology is usually accompanied by a high investment. In addition, operational reasons often indicate that certain processes should be left manual. Therefore, LILA LOGISTIK always strives for the optimal overall concept and focuses exclusively on how automation pays off for our customers. It is crucial to find the optimum degree of automation for each individual process, depending on the respective requirement. Start-up assistance is provided by our specially developed 4-phase model, through which we assess which material flow processes are best suited for our own and our customers' processes:

Each company has individual challenges and frameworks that need to be considered. The Lila Logistik 4-phase model serves as a compass to take the right steps toward an ideal material flow. In the following article, Andreas Rudolph, head of logistics planning at Lila Consulting, deals with digitalization as a future trend in material flow planning.

If you are thinking of automating your logistics processes and want to know more about our approach, we look forward to hearing from you.

Is digitalization the only solution?

We discuss the subject of digitization as a future trend in material flows planning in the attached white paper. 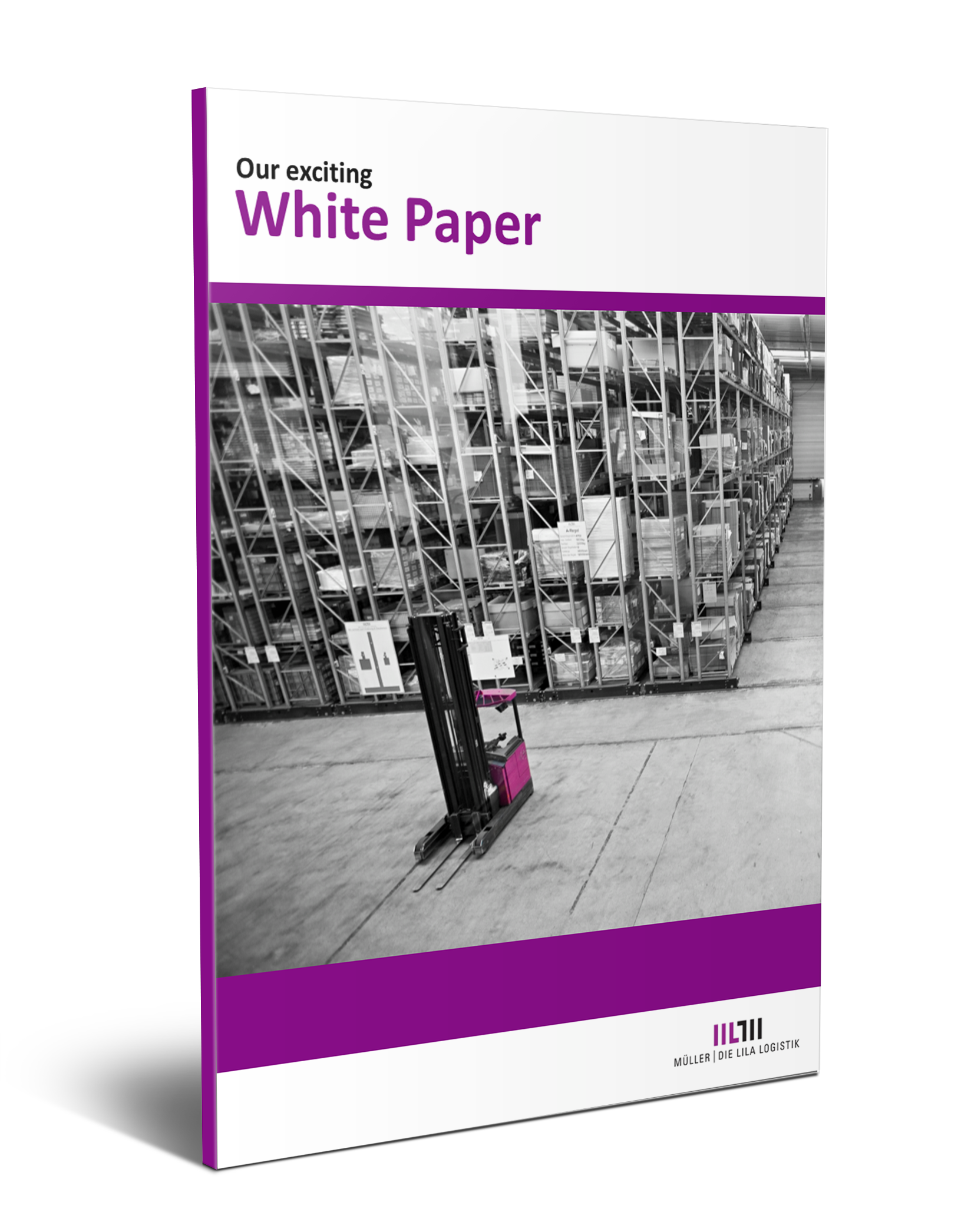